…this week, Carole’s asked us to share the knitting patterns we’d choose to knit again (and again). I was just teasing Kym about when she was going to knit a second Color Affection and it got me thinking about the patterns I’ve knit – and/or hope to knit – more than once:

1. February Lady Sweater. I’ve knit this three times and I have to say it was a great knit…five years ago. Now, not so much. Until I have a granddaughter and I’ll knit her Elizabeth Zimmerman’s original February Baby Sweater.
2. Clapotis. Also a three-timer. And another one I probably won’t make again…because for diagonal lace, I much prefer the
3. Churchmouse Diagonal Lace Scarf. I knit four of these for our trip to Florence in May…and I’m still not sick of the pattern! It works for any yarn and once you get the gist of the lace it’s a great social project.
4. Traveling Woman. I’ve finished four; two for gifts and two for me. The first one was for me and was one of the (or maybe the) first KALs we did at the shop back in spring 2010; I’ve worn it out. I knit the second one for myself in 2012 to kick off my “Saturday lace” class. I knit the third and fourth this past spring for prayer shawls. Obviously, this is one of my favorite shawl patterns. It’s now my go-to for a friend who needs a warm hug…and I totally want to make one for myself in laceweight with the eyelets in the stockinette body section.
5. Color Affection. I’ve knit this twice, once in fingering and once in laceweight and I still have both…and wear them all the time. Something about all that garter stitch, and choosing the three complementary colors makes me a happy knitter.
6. Churchmouse Easy Folded Poncho. I’ve made two and the second, in linen, is one of the most favorited projects I have on Ravelry. I can’t wait to make another one (next up is definitely going to be for winter. maybe with the cowl neck).
7. Shibui’s Mix No. 9. This was another shop KAL. We hosted a Shibui trunk show in early 2012 and that cowl was huge hit. So many people loved it and bought yarn (and it’s not a little bit of yarn – if I recall something like 5 skiens of Staccato and 3 of Silk Cloud?) we felt obligated to be sure everyone finished their projects. I loved mine. so I knit a second one for Katie last Christmas with a different mix but the same stitch pattern. I’m sure Sara needs one too (in a cozy mostly alpaca blend 🙂
8. Churchmouse’s Basic Socks. I taught a sock class back in 2010 and wrote up my own vanilla recipe; I wish I’d had this pattern then! Marc and Rob have the heavier weight version (knit with worsted weight they are perfect for a man’s foot), as does Sara (in the suggested Rowan Felted Tweed…perfect for Madison house socks). Katie has a pair of the fingering weight and Sara will have two…once I finish WIP’s. My latest pair incorporates Carole’s Picot Edge…and I think it might be my favorite so far.
9. Churchmouse Bias Before & After Scarf. I’ve knit this twice. Both times for me. and I doubt anyone who wasn’t a knitter could tell they were the same pattern. My first attempt mixed a skein of Claudia Handpaint’s Linen with 2 skeins of Rowan’s Panama and the second (the Traveling Scarf in the top photo) was most of a skein of Juniper Moon Farm’s Findley. I love the versatility and the layerability. and the zen of short stockinette rows. I also have the yarn to knit one to layer with that Findley one (soon!)
10. Churchmouse Linen Stitch Scarf. oh man, I’m surprised this is gonna make the list. but it is. I’ve knit it twice (and just gifted both scarves to a friend who LOVED them…and moved to North Carolina) and when Claudia (the Claudia. Handpaint’s Claudia) visited the shop in March, she signed three skeins for my next one. It’s a classic. and while it’s certainly a pain to knit (and to keep up with the fringing ends!) it’s a stunning piece. 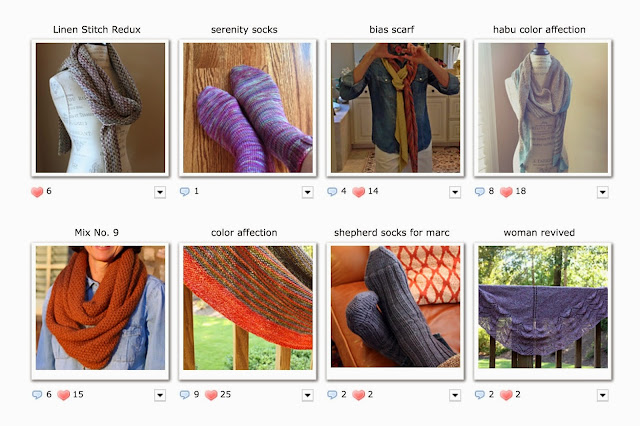 hummmm…almost all accessories and Churchmouse plays the leading role. Shibui – in my mind at least! – plays a close second. There was certainly a time in my knitting life where it was all “life is too short, I can’t possibly knit the same thing twice” (let alone three or four or five?? times)…but looking back at this list, and those last eight patterns… I realize my perspective has changed. I love having a short list of go-to great patterns. I’d like to add a hat or two…and a baby item or two…and I’d be set.
Can’t wait to see what everyone else shares!