…Carole’s prompt this week is about concerts. People, bands, etc. we’ve seen in real life. No surprise if you know me well, but I didn’t even think I had ten to list…until I made the list (and I even left a few off!) 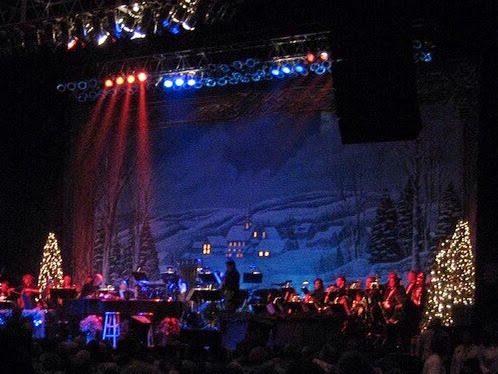 (from the Johnny Mathis concert. Christmas 2007)

1. Billy Joel. I’ve seen him at least four times (and hate that I’m not sure about that right now!) The first time was in college (Glass Houses?) and I know the last time was about 8 years ago (with Elton John…see #2). He was still terrific and I’d go see him again in a heartbeat.

2. Elton John (& Billy Joel). With Katie and my sister circa 2006. amazing. I’d see him again, too (if I could afford the tickets).
3. Lena Horne. A Sunday matinee at the Fox, spring of my senior year in college. She was amazing. I went with a girlfriend who was a huge fan and it was fun to share her excitement. This was the first time I’d dressed up to see a concert and that made it special, too.
4. Allman Brothers. I think this was the first “real” concert I went to. Early college years. Again at the Fox. I wasn’t a big fan of the band then and didn’t know enough of their music or their talent to stay awake through a very (very) long drum solo.
5. Jackson Browne. The only concert I’ve seen at Atlanta’s Chastain Ampitheater (outdoors, guests bring picnics), circa early 2000’s. It was a business evening (Marc’s business) and I have great memories of the dinner before at Horseradish Grill (no picnic for us!) but not-so-great memories of the concert. He sounded old, and tired, and sad…
6. Lady Antebellum. The only concert I’ve seen at the Gwinnett Center. This was another work thing for Marc, but this time very fun. A band we both love, good company and a great venue. This is the last concert I saw…summer 2012.
7. Rolling Stones. Marc got the tickets and then couldn’t go. Instead I took the girls. We stayed in a hotel and made a weekend of it. Katie was in college and I think it was pre-blog, so I’m thinking 2005/2006? Box seats at Phillips Arena. I don’t think Katie or Sara knew much about any of it…but I had a ball.
8. Tuck and Patti. I wasn’t even sure they were still a thing. and maybe they aren’t, but when I googled them this morning, I found out they’re still touring, and teaching music. This one stands out because it was a dressy date-night for us in the early 1990’s (early parent days). We went with another couple and I think we shared a sitter. Dinner after was as big a deal as the concert. I haven’t listened to their music in years but I’m guessing I’d still love it.
9. Johnny Mathis. My mom has been a fan of his since the 50’s and she passed that love on to me and my sister. We took my parents to his holiday concert at the Fox in 2007. We offered tickets to other family members…no takers. He gave a great performance (oh my he’s aged well!) and the concert was a lot of fun.
10. Rascal Flats. Had to include this one because it’s the only time I ever left before it was over. This was another work thing for Marc; his boss (and his family) was a huge fan. Marc and I weren’t. I have no idea how long they played but we didn’t run into any traffic on the way out!
Breaking my usual rule, I’ve already read a few of the other posts today. Wow! my blog friends have seen – and are still planning to see! – some really fabulous entertainers! I’m not sure if (or when) I might see another concert…but that’s ok. Who would you like to see IRL, and is it again? or for the first time?

6 thoughts on “Ten on Tuesday | Seen in Real Life.”